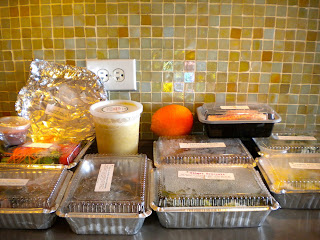 I've mentioned before that we do very little cooking in our house, despite the fact that I really enjoying thinking about food and collect recipes. It's just that when it comes down to it, I'd much rather spend my evening doing other things, like writing or reading or talking with LOML, and not cooking something from scratch. Well, he does most of the cooking, but the sentiment is the same.

Many moons ago, when I was still in college, I heard about an amazing nonprofit called First Slice. First Slice provides food to homeless LGBT youth living in the Lakeview neighborhood of Chicago. They raise money for their programs by operating three cafes (soon to be four!), where all of their proceeds go toward funding their food programs, and by offering a program called "To Your Table." Each week, participants in the "To Your Table" program pick up three entrees, five side dishes, and pie to take home and eat throughout the week.

For various reasons (notably the lack of a car to get to any of the cafe locations where I could pick up the food), I wasn't able to participate in the program when I was in college. When I moved back to Chicago, I knew that I wanted to participate in this program and we finally signed up in September. I have been absolutely thrilled with almost every aspect of the program--I love the fact that we get to eat real food (no more take-out tacos, as delicious as they are), we eat vegetables (though please don't tell my mother that I actually ate the broccoli), there is much greater variety to the meals we eat than we would ever have if we cooked everything ourselves, taking leftovers to work is really easy (each entree feeds three people, so we can have some for lunch the next day), I don't have to think about what to make for dinner, and we can use the time we would cook doing something else, and of course, the fact that it helps a nonprofit in our community is an added bonus.

First Slice does its programs in "sessions" of seven or eight weeks at a time. We're on our second session and plan to continue indefinitely. The food is excellent--three entrees (we always get one veggie, one meat, and one fish or a wildcard), a salad (a different type each week with a fresh salad dressing), a vegetable (the curry cauliflower was unbelievably delicious), soup (lentil and orzo, cheddar broccoli, baked potato), pizza (goat cheese, Greek, artichoke), a starch (mashed potatoes, twice-baked potatoes), and three slices of a different pie each week. The pie is fabulous, though for some reason we never remember to eat it.

The price for each session varies depending on the season and what's on the menu, but for the last two sessions, the cost has averaged around $75 a week. Which is fantastic when you consider that a) it's a lot of food (9 meals worth of entrees, and then we have two side dishes one night and call it another meal. We usually can eat lunch and dinner from First Slice 4 or 5 days each week) and b) we used to spend **much** more than that going to Target to pick up groceries each week that we'd then have to cook ourselves.

If you're in the area, you should absolutely check First Slice out--it's an incredible service that I can't recommend highly enough. 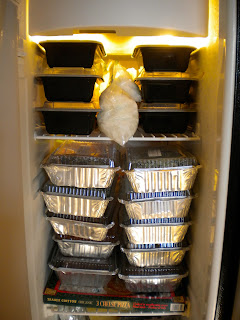 The freezer (did I mention that everything (except the salad, of course) can be frozen for up to 3 months?) Note the containers at the top. Yes, we really do have six (and probably more) different types of pie in our freezer.... Two words: weekend breakfast

Disclaimer: I wasn't paid to write about this fantastic organization--I just think it really is that awesome and I've told absolutely everyone I know about it.
Posted by Caroline at 8:19 PM