On my bus ride home tonight, I was sitting in the jumpseats, right by the front door. I've never understood those seats. Inexplicably, there is a step to them, and my knees--my knees, of all peoples' brush against the random wall behind the driver. The seats are open on one side, and since there isn't any room to move your legs and brace yourself, if the driver turns a corner at speed--any speed--you're liable to fall over into the aisle. No good.

I say this because tonight, inexplicably, the bus driver was singing the whole way home. Of course, I totally can't remember what he was singing (though when I tried to think of it, the first song that popped into my head was "Creep" by TLC, which is just sort of awesome). I hadn't noticed at first, but then I realized that he was pausing at every stop in order to announce the name of the stop since the bus wasn't announcing the stops (nothing new there...ah, the CTA) but then he said "Turning left" as we rounded a corner, and I started to get very alarmed. A talking bus,  I can do without, but turn signals are not optional.... 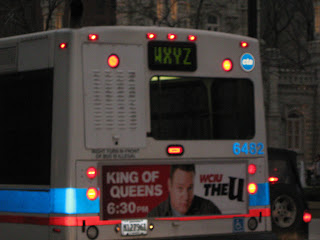